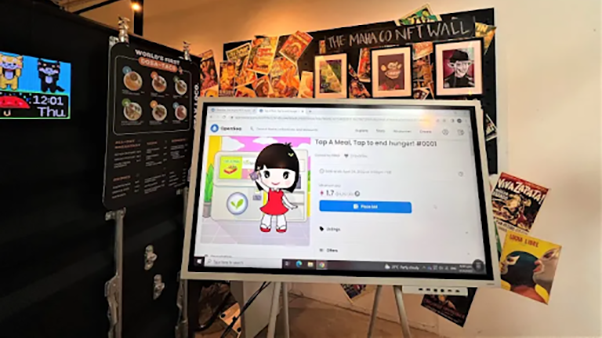 Non-fungible tokens have had their fair share of controversies and criticisms. Hand in hand with industry-wide support for this particular form of digital asset is also a boatload of questions about the value they bring to the table. However, amid the doubts, one thing is clear: NFTs offer not only financial utility but also the opportunity to make a difference. In the past year alone, countless individuals and companies have launched collections designed to raise awareness about a pressing issue, inspire change, and positively impact local and global communities. Food Bank Singapore, the brainchild of brother-sister duo Nichol and Nicholas Ng, joins the growing list of purpose-driven ventures wielding the power of NFTs for a cause.

Owners of a reputable Singapore-based food distribution business, Nichol and Nicholas Ng founded Food Bank Singapore, or FBSG, after a stark realization about the increase in food prices and wastage in the country. Its establishment is the result of thorough research and a meticulous conceptualization of programs aligned with the overarching goal to end hunger in Singapore by 2025.

Since its creation in 2012, Food Bank Singapore has gone all-out in helping reduce food waste and solve the problem of food insecurity. Its latest move is one that capitalizes on the perks of non-fungible tokens and the extent to which they can be utilized to raise funds needed to support an initiative. Hoping to raise money for families struggling to put food on their table, the venture has entered the NFT scene by minting its mascot, KooriMo.

Three art NFTs based on the food charity’s mascot were created and made available for auction from April 21 to 24. The tokenized artworks, drawn by artists from the multimedia design studio Smobler Studios, were up for grabs on OpenSea.

The auction, while highly anticipated, is not the sole focus of Food Bank Singapore this year, nor will it serve as the only fundraising event. In celebration of its tenth anniversary, FBSG plans to raise $12 million for its Bank Card Programme, an initiative that is set to provide 10,000 beneficiaries with a prepaid card. This prepaid card, which comes with a monthly top-up of $100 and can be used at various restaurants and over 60 vending machines, will allow individuals and families to redeem free meals for an entire year.

Currently, Food Bank Singapore continues to welcome donations, including those in the form of cryptocurrencies. Moreover, it is gearing for the implementation of its upcoming plans, some of which revolve around the development of a metaverse and the release of other assets that can be sold to raise funds to support the charity’s goal of ending food insecurity.